featuring products that make great Grand Lake area gifts.  These products are  designed by k Sikorski
and produced by zazzle.

Wake to the sounds of birds singing and relax to their songs throughout the day.  Geese waddle by, pelicans float past & occasionally an eagle is spotted
on the shoreline.

​​We are a pet-friendly park as long as pets follow the rules which are based
on consideration of others in the park...pets must be pre-approved... 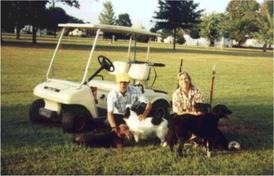 written in 2009, updated from a 2000 article written by Bart Montgomery

25 years ago that Erv and kathi Sikorski were looking for a wonderful place to live.  They weren't looking for a business to run, but they took over ownership of Grand Country Mobile Home Park anyway.  It wasn't only the opportunities they saw that dictated
such a decision.  It was the beautiful location along the shores of Grand Lake (Oklahoma) that made them feel as if their new home was calling out to them.
"We looked all over the country and this area was the most appealing.  The weather here was great and the people were so nice," says kathi.     Among many new developements at the park...came an unexpected new venture for kathi.   A necessity for
signs in the park eventually became a new business =called "Signs by Sikorski."  Kathi credits Erv's nephew Jack for giving her such good advice about the adventure she was about to embark upon.  The signs Kathi had designed for the park had impressed her enough to believe the business was a good idea, but Jack gave her the ins-and-outs
about materials, supplies and pricing.  Kathi let all of the new knowledge soak in and then took that first step down the entreupanerial highway. Erv continued to drive a semi
and kathi managed the park while developing the sign company...all projects in the park
were done by both when Erv was home.  We did one project at a time...planted trees...built a pavilion...put in better roads...built a storm shelter...and the mobile home park slowly turned into Grand Country Lakeside RV Park.
.    Since this article was written, Erv has "semi" retired and used the money from the sale of the semi  to invest in a new full-color printer for the sign shop...
For the most part, Erv manages the RV Park and kathi the sign shop and they assist each other as need be. 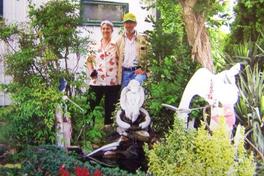 explore the huge diversity of
attractions and activities on and off the lake. Also included are accommodations, restaurants,services and links to much more.